Some History of the Thomas J. Pope Family

The following is based heavily on an excellent genealogy report by Judge William A. Pope, II of Oakton, VA, on Feb. 28, 1997, hereinafter referenced as the Pope Report. That report is on file with the Sumner County Historical and Genealogical Society in .

William Pope, perhaps we should call him William the First, was born in in 1776. The 1820 census shows 8 men with the name, William Pope, living in in 6 different counties. His wife’s name is not known. The Pope Report suggests a maiden name of Gilleland. I think that is unlikely because Thomas J. Pope married Martha Gilleland and there is evidence that his daughter, Nancy J. married John O. Gilleland according to a biography of Theodore R. Gilleland in a History of Hendricks County, Indiana, Profiles of Liberty Twshp.

In the Pope Report Notes, “William Pope’s name appears in the Census of 1830, 1840, and 1850 for . The 1850 Census shows him as the head of the household, his age as 74, his place of birth as , and his occupation as Baptist minister.” William died in 1853 and is buried in the Irons/Miles Cemetery in Hendricks County, Indiana.

William had at least 3 sons:

While in Indiana, Thomas J. Pope married twice. According to the Indiana Marriage Collection 1800-1941 Record, when Thomas was about 24 he married Lydia M. Reagan on 26 Mar 1840 in . Less than 2 months later on 09 May 1840 their first son, Francis [Frank] Marion Pope, was born. A daughter, Mahala Violet Pope, was born in 1845, and another daughter, Mary Helen Pope, was born 6 June 1848. We have no record of what happened to his first wife, , but on 17 Aug 1851 Thomas married Martha Ann Gilleland in Hendricks County Indiana. She was only about 15 at the time and Thomas was 35. Their firstborn was a daughter, Jane, born in 1855 in . Subsequent census records show all children living with Thomas and Martha. One possible conclusion is that died between 1848 and 1851.

Sometime between 1855 and 1860 Thomas and Martha moved to [shown in red/dark] with their family. The two counties highlighted are Gentry on the right and Andrew, where Thomas later moved. They are listed in the 1860 census for in a listing that spans two pages. His older brother, William, is also listed in the same census, though his age stated in the online index file is inconsistent with the age given on the actual image, which is 48.

Copy of the appended census records for Th. Pope is shown here, modified in size to fit the page.

I believe that the 1860 census records [on 2 pages] read as follows:

An age of 43 for Th. is fairly consistent with his birth of 17 Jan 1816 found in other records. The Pope Report concludes that “” is a son, Francis Marion Pope, born 5 May 1840 making him about 19 in the 1860 census. “Martha” is likely Martha Ann, wife of Thomas. “Mahala” is probably his daughter, Mahala Violet Pope, born about 1845. Mary is most likely his daughter, Mary Helen Pope born 06 Jun 1848. Jane is likely the firstborn daughter of Thomas and Martha.

By 1870 the Thomas J. Pope family had moved from to the adjacent Andrew County, Missouri and is recorded there in the 1870 census for .

From his tombstone we know that Thomas J. Pope died on 25 Apr 1885 at the age of 69, so it would appear that for the 1870 census he understated his age by a year or two. “Miranda J.” is probably Miranda Jane Pope, a daughter listed as Jane in the 1860 census. There is not further record of Columbus or James and they do not appear with the family or separately in the 1880 census.

By 1880 Thomas had moved his family further south to Clay County, Missouri. A summary for the 1880 census information for , for Tho. J. Pope shows the following

Susan Martha Pope was known by the nickname, “Sudie,” all her life according to living family members, including myself. It is believed that “Jeffie” is a nickname for . Thomas appears to understate his age by about 4 years, as he died 5 years later at the age of 69.

Sometime between 1880 and 1882 Thomas J. moved his family from to in Sumner County, Kansas near his oldest son. Soon after that his youngest son, Jeffie died. My sister, Joann, recalls that family oral history says that he was killed when a horse rolled on him.

Jeffie is buried in in , Sumner County, Kansas. 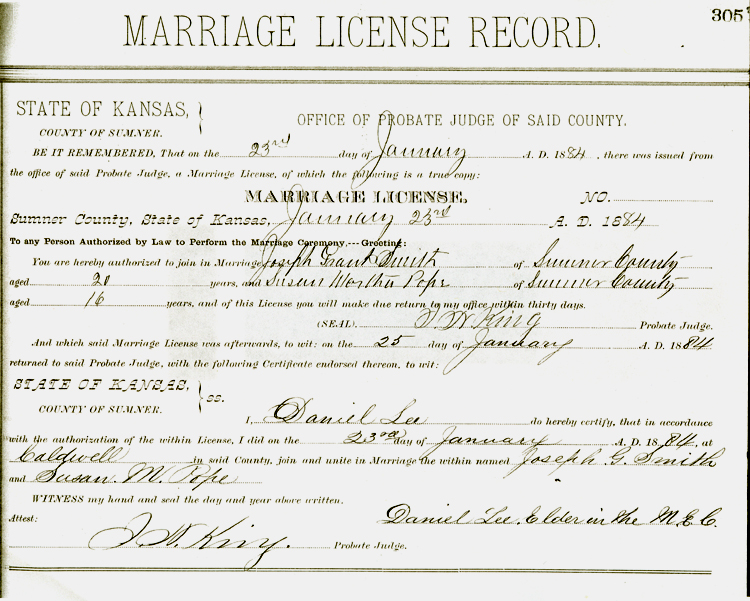 The location of the homestead was only about a mile west from that of his son, Theodore G. Pope. A portion of an ownership map from 1918 is shown here with the 80 acres homesteaded by Thomas J. shown in red/dark. By the time the map was created in 1918 the homestead was part of 160 acres owned by W.G. Jones.

Thomas J. Pope never lived to see his homestead request granted, but it was granted to his heirs on 3 Jun 1901 with a land patent. A copy of that patent is in the courthouse and is reproduced here.

He died on 25 Apr 1885 about 3 years after the death of his youngest son, Jeffie. They are buried near each other in , , Sumner County, Kansas.

No printed obituary for Thomas J. Pope has yet been found.